Xiombaca and the Garden of Thorns 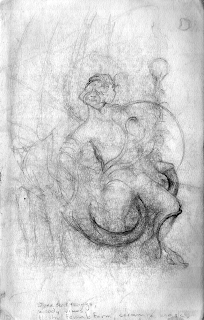 Xiombaca and the Garden of Thorns...
The x, pronounced as a nearly silent z, EYE-ohm-Bah-kah.

She is an ancient manifestation of chaos; destruction through rampant, unbridled creation. Typically, as in this decaying sketch, she is depicted nude on a throne, her true face disguised in her own growth as false faces both beautiful and grotesque manifest about her true face. She is crowned with a halo of thorns, and is adorned only in the thorny vines that grow from her womb, engulfing her throne and court, choking and destroying all around her.

Her throne is made of suffering, depicted as men or angels bent into subservience at her whim to provide comfort at their own expense, as Xiombaca's garden of destruction wraps and racks their bodies with pain.

The vines as depicted are both emerging and entering, aspects of both the intrusive and expulsive acts of procreation, but thorned as they are, demonstrate the wound of sundered purity, the violence of rape, and the pain of birth; all made grizzly and undeniable. She is a twisted and dark fertility goddess, a furrow in which only ill seed grows.
Posted by n8mcd No comments:

The Game of Thought

Herein we will find my ramblings on game and world design, and the occasional project. This blog is a selective reproduction of my online personal journal, and so has entries much older than this blog itself.